The 2009 Hugh Heward Challenge is scheduled for Saturday, April 25 at 7:00 a.m.  Please click on the following link for more detailed information:

Tuesday, April 21 at 7:00 p.m. Jay Hanks will be hosting a presentation on “Recreational Kayak Safety”.  There will be a 60-minute DVD shown on the subject and then discussion and any questions can be addressed.  With the springtime and the growing popularity of kayaks you will not want to miss this opportunity to have a safe and enjoyable kayaking experience this year.

The 3rd Annual Big South Branch of the Pere Marquette River Overnight had its best attendance in the last three years, with eight paddlers meeting at the rendezvous point.  Despite snow flying all morning on the drive to the river, me and Dan Sullivan, Rich and Emma Bailey, Rodney Wilbur and his friend Bill, Mary Powell, and Brenda Battin were ready for the weekend. 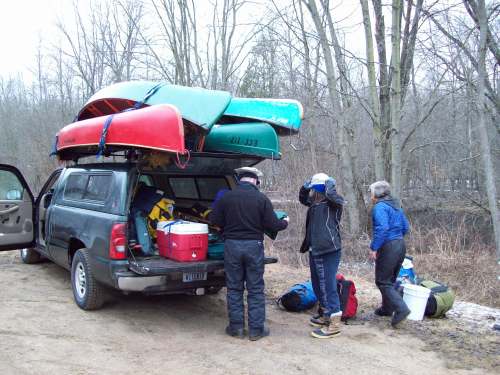 Temperatures had been around 27 degrees when it started snowing but it kept warming up little by little.  We all launched into the river and began to immediatley encounter the typical logjams and obstacles in the water.  We called it “adventure paddling” and took it in stride.

By the time we stopped for lunch the clouds were breaking up and before long we had beautiful clear blue skies and an ever warming sun.  The river through Ruby Creek was fast and wide open making for a fun ride.  The massive log jam from the last two years was also gone and we floated into camp without as much legwork as we had anticipated from previous years.

Temperatures were now in the 50’s and the bluff site we camped on had full sun all the way to sundown.  Bill had left us at Carr Road so there were seven of us in camp and there was still plenty of room for even more if necessary.  The small fire we sat around had shown no sign of being used in the past year so we felt we had the site all to ourselves.

Sunday morning temperatures were around 38 degrees but there had been no rain (or snow) and although it was overcast it was not uncomfortable.  Rich, Emma and Rodney got out at Walhalla Road so that left four of us now to continue.  There were a lot more portages on Sunday and by the time we stopped for lunch at one of them I was wondering if all of the free passes on Saturday were being paid on Sunday.

We were rewarded for our efforts as the sky again cleared of clouds and clear blue was overhead with the welcome sunshine.  Mary and I ended our trip at Wilson Bridge while Dan and Brenda continued on all the way to the planned take out on the mainstream of the Pere Marquette.  We all had truely enjoyed the river despite the work and felt it was definitely a “SPRING TRIP”.

The Lansing Oar and Paddle Club was recognized by the Meridian Township Park Commision Tuesday evening March 10 for its continued efforts on the Red Cedar River.  The award recongized the canoe launch improvements made by the Club at the Van Atta Road access, annual cleaning and clearing activities following DEQ guidelines, and the volunteer support of the Club at the Red Cedar Paddle Event in 2008. 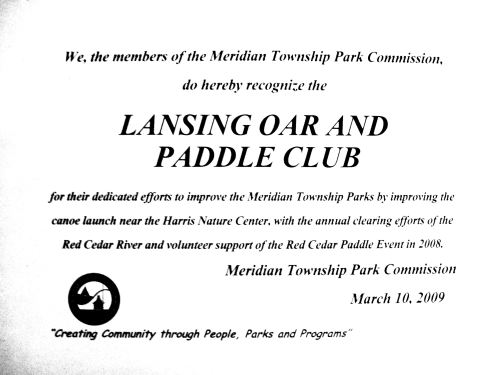 The 3rd Annual BiSBotPeMRO will be held Saturday, March 21 and Sunday, March 22, 2009. We plan on meeting at 9:00 a.m. Saturday morning at Custer Bridge on the mainstream of the Pere Marquette River. We will run shuttle from there upstream to launch at 16 Mile Road and Dickinson Avenue.

We intend on camping on public land downstream with no established facilities. You will need to bring everything you need to be self-sufficient for the weekend. However, unlike the February Au Sable trip, we will not be required to float our own firewood down. Most of the snowpack should be reduced by then so we can forage for our own firewood.

There are numerous access points along the route, so if someone wished to only paddle for Saturday we could accomodate them by leaving their vehicle at the last bridge before we camp. Anyone wishing to only paddle on Sunday will have to either launch early from the upstream bridge or wait for us at the next downstream bridge. Those locations will be arranged when we run shuttle. 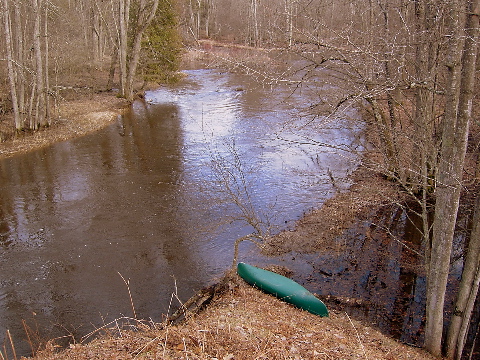 Suffice it to say that wilderness trippers jealously guard the locations of their favorite campsites, and this is no exception. We have a spectacular place to camp with high ground, ample deadfall, plenty of space, great views, easy access to water, and no road access.

Sunday we will float out to join the mainstream and takeout at Custer Bridge. It is prudent to mention that there are numerous logjams on the stream that require portaging. There are more portages on Sunday then Saturday, but the ones on Saturday are more adventurous. Two years ago I got trapped upstream above this logjam and had to scramble out onto the pile while my boat got vertically stuck in the river. I had to stare at the surreal sight of my canoe vertically bobbing in the current before I could collect myself and recover it. 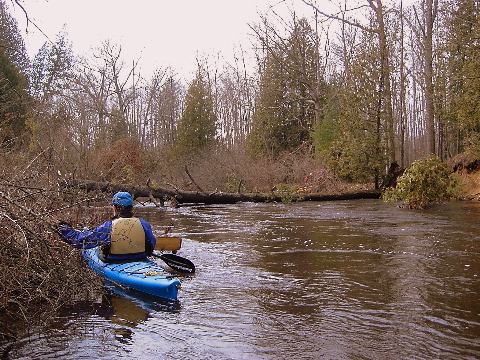 Although the weather should be nicer then the February Au Sable trip, this is not a beginner trip. Everyone is expected to bring their own equipment and know how to use it Hypothermia is still a very real danger, and people who over-rate their abilities not only put themselves in danger, but put everyone else they are paddling with in danger. There are plenty of opportunities in the summer to learn how to wilderness trip in a canoe or kayak safely.

Tuesday, March 17 at 7:00 p.m. Jay Hanks will be presenting his trip to Killarney Provincial Park in Ontario from last October.  The fall colors were spectacular and in honor of Canadian Thanksgiving Day  they cooked a turkey in the middle of the wilderness.  Come see this entertaining multi-media presentation with both video and slides from the trip.  Contact Summit Sports in East Lansing, 2650 East Grand River at the corner of Park Lake Road.  Their phone is (517) 332-4000.