The 2nd Annual BiSBotPeMRO took place as scheduled on Saturday, March 29. The promise of sunny skies and 40-plus degrees came true for the nine paddlers that rendezvoused for this little adventure. The presence of a fair amount of snow still covering the ground was surprising for those of us who have not been up north in the last month. We had been trying to get used to spring downstate.

The previous month’s Au Sable trip had the primary element of winter cold to deal with, otherwise the actual trip on the Au Sable is fairly straight forward. Not the BiSBotPeMRO. It is seldom paddled and is a relative unknown. That makes for lots of deadfall in the river and portaging when you can’t find a way to claw through the natural obstacles. 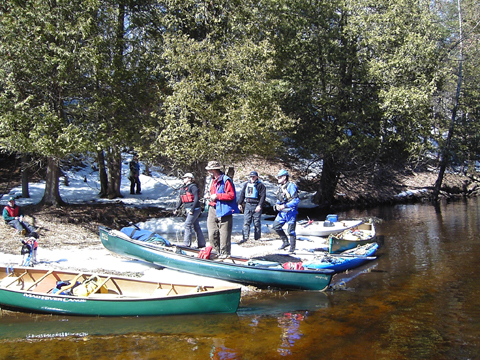 Many of the paddlers were only in it for the day, and just prior to the final stretch to camp they pulled off the river. The remaining four of us camped on a nice spot with a view of the surroundings. Night came with clear skies and the temperatures quickly dropped into the 20’s, but the weather changed around 2:00 a.m. and the wind came up with overcast skies.

Wildlife was active with sandhill cranes in abundance, along with the many ducks. Owls started chiming in at dusk and when we were all tucked in the coyotes let us know they were nearby. We saw beaver, muskrats and mink on both days in the daytime.

Sunday morning was a little warmer but windier so I think the chill factor balanced out. There was a little sleet like tiny styrofoam beads but nothing more and it didn’t precipitate the rest of Sunday.

Saturday’s portaging was physically draining but Sunday’s was a little easier. However, by the time we got to the last bridge and the slow, marshy section we were still having to jump out or limbo through the deadfall. Even 100 yards from the mainstream of the Pere Marquette River, we had one more portage to do.

The BiSBotPeMRO is not for the faint of heart. It is a tough little river that demands a high price of admission. However, you won’t find a more rewarding experience on a very wilderness feeling river in the Lower Peninsula of Michigan

This entry was posted in Trips. Bookmark the permalink.